Volume rendered Brain SPECT perfusion maps. The results are of a patient in the treated group suffering from left hemiparesis due to ischemic stroke that occurred 26 months prior to inclusion in the study. 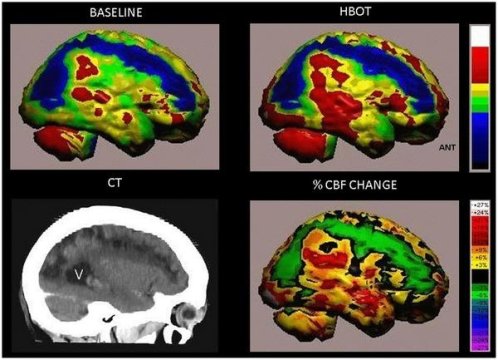 Dr. Shai Efrati of Tel Aviv University’s Sackler Faculty of Medicine has found a way to restore a significant amount of neurological function in brain tissue thought to be chronically damaged — even years after initial injury. Theorizing that high levels of oxygen could reinvigorate dormant neurons, Dr. Efrati and his fellow researchers, including Prof. Eshel Ben-Jacob of TAU’s School of Physics and Astronomy and the Sagol School of Neuroscience, recruited post-stroke patients for hyperbaric oxygen therapy (HBOT) — sessions in high pressure chambers that contain oxygen-rich air — which increases oxygen levels in the body tenfold.

Analysis of brain imaging showed significantly increased neuronal activity after a two-month period of HBOT treatment compared to control periods of non-treatment, reported Dr. Efrati in PLoS ONE. Patients experienced improvements such as a reversal of paralysis, increased sensation, and renewed use of language. These changes can make a world of difference in daily life, helping patients recover their independence and complete tasks such as bathing, cooking, climbing stairs, or reading a book.

According to Dr. Efrati, there are several degrees of brain injury. Neurons impacted by metabolic dysfunction have the energy to stay alive, but not enough to fire electric signals, he explains. HBOT aims to increase the supply of energy to these cells.

The brain consumes 20 percent of the body’s oxygen, but that is only enough oxygen to operate five to ten percent of neurons at any one time. The regeneration process requires much more energy. The tenfold increase in oxygen levels during HBOT treatment supplies the necessary energy for rebuilding neuronal connections and stimulating inactive neurons to facilitate the healing process, explains Dr. Efrati.

For their study, the researchers sought post stroke patients whose condition was no longer improving. To assess the potential impact of HBOT treatment, the anatomical features and functionality of the brain were evaluated using a combination of CT scans to identify necrotic tissue, and SPECT scans to determine the metabolic activity level of the neurons surrounding damaged areas.

Seventy-four participants spanning 6 to 36 months post-stroke were divided into two groups. The first treatment group received HBOT from the beginning of the study, and the second received no treatment for two months, then received a two-month period of HBOT treatment. Treatment consisted of 40 two-hour sessions five times weekly in high-pressure chambers containing oxygen-rich air. The results indicate that HBOT treatment can lead to significant improvement in brain function in post stroke patients even at chronically late stages, helping neurons strengthen and build new connections in damaged regions.

A potential avenue for prevention

Although the study focuses on patients only through three years post-stroke, Dr. Efrati has seen a similar improvement in patients whose brain injuries occurred up to 20 years before, belying the concept that the brain has a limited window for growth and change. “The findings challenge the leading paradigm since they demonstrate beyond any doubt that neuroplasticity can still be activated for months and years after acute brain injury, thus revealing that many aspects of the brain remain plastic into adulthood,” says Prof. Ben-Jacob.

This study also “opens the gate into a new territory of treatment,” adds Dr. Efrati. The researchers are currently conducting a study on the benefits of HBOT for those with traumatic brain injury. This treatment also has potential as an anti-aging therapy, applicable in other disorders such as Alzheimer’s disease and vascular dementia at their early stages.

“It is now understood that many brain disorders are related to inefficient energy supply to the brain,” explains Dr. Efrati. “HBOT treatment could right such metabolic abnormalities before the onset of full dementia, where there is still potential for recovery.”