Ohio State University surgical scientists used topical oxygen therapy to treat 30 patients with a total of 56 wounds. The therapy required placing a bag containing pure oxygen over the wound for 90 minutes a day. More than two-thirds of the difficult wounds healed with the oxygen treatment alone.

-Topical Oxygen (TO2) Therapy is a low–pressureoxygen therapy which applies oxygen directly to the wound site at 1.03 atmospheres of pressure. It is a safe, effective and non-invasive therapy for treating open wounds in any setting – including the comfort of your home. 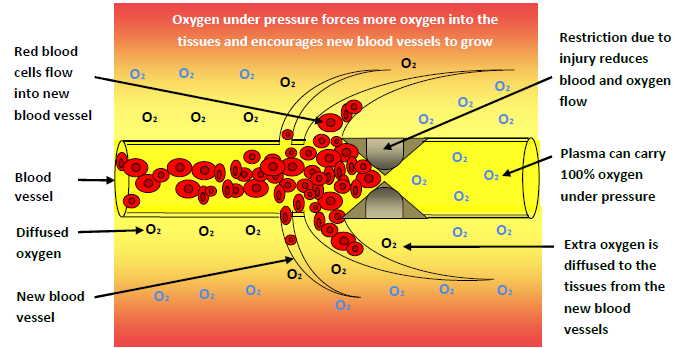 Wounds in this clinical study ranged from post-surgical wounds to injuries resulting from acute trauma to ulcers – such as diabetic hand ulcers and bedsores. Many of the patients had conditions like diabetes that hindered wound healing.

“The quality of closure is very impressive,” said Chandan Sen, the study’s lead author and director of the Wound Healing Research Program in Ohio State’s department of surgery. “There was much less scarring than we had anticipated.”

“In most cases, the amount of residual scar tissue in the healed wounds after oxygen therapy appeared to be substantially less than we would expect after treatment with more standard forms of wound care,” said Gayle Gordillo, a study co-author and a plastic surgeon at Ohio State. “There was less defective tissue in the area once the wound healed.”

The research appears in the current issue of the journal Pathophysiology. Sen and Gordillo conducted the clinical case series study with Richard Schlanger, director of Ohio State’s wound healing clinic, and Loree Kalliainen, of Ohio State’s department of surgery.

Physicians at the university’s medical center monitored participants for up to nine months.

The study included people who had wounds that failed to heal with standard treatments, such as with stitches or the addition of wound care creams, and wounds at high risk of developing healing problems after surgery.

Topical oxygen treatment was delivered with an inflatable, see-through plastic bag with edges that adhered to the skin. It was secured around the affected limb or wounded area, and pure oxygen was administered for 90 minutes a day for four days, followed by a three-day rest period. This cycle was repeated for as long as the wound appeared to be healing.

Participants were treated in the hospital, in their homes or in extended care facilities. Treatment duration ranged from 24 days to about eight months.

Photos were taken before, during, and at the completion of the therapy. Wounds were considered healed once they were completely covered with epithelial tissue. Follow up ranged from less than one month to eight months. When a wound hadn’t begun to heal after 16 weeks, physicians attempted to close the injury with surgery.

Overall, the wounds least responsive to topical oxygen therapy were post-surgical wounds on the legs and feet, pressure ulcers and neuropathic foot ulcers.

“While topical oxygen helps wounds heal, it alone may not be adequate for managing lower extremity wounds and bedsores,” Sen said. “For these types of injuries, topical oxygen may be helpful as an adjunct to surgery or other forms of standard wound care.

“However, it is a good alternative to traditional wound-healing treatments for people with chronic wounds or wounds that have a high chance of healing poorly,” he said. “There have been no reported side effects from topical oxygen treatment, and the majority of chronic wounds in this study plus all of the acute wounds either healed or decreased in size during therapy.”

Topical oxygen chambers, which have FDA approval, may also be a more cost-effective treatment choice, too.

“The cost of a home health-care nurse can run $100 an hour,” said Gordillo. “If a person can take two weeks off his expected healing time, the cost of using topical oxygen will probably pay for itself.”

“The alternative to topical oxygen therapy, high-pressure chamber oxygen therapy, is considerably more expensive,” Sen said. “Also, it’s not readily applicable to all wound patients, as some are sensitive to high levels of oxygen.

“Topical oxygen is a simple form of therapy which, if necessary, many people could use at once, such as in the case of a public disaster,” he said. “These bags are also suitable for use in the field, so the treatment may be an option for deployed military troops. Further research testing the potential of topical oxygen therapy is warranted.”

The researchers received the topical oxygen chambers used in this study from GWR Medical, Inc. The researchers have no financial interests in this company.